FSE-CSQ and QPAT teachers adopt sectorial settlement proposal but believe teachers deserve better
Québec, May 18, 2021 — Having submitted to their respective members the Treasury Board’s proposed sectorial settlement during general assemblies of unions represented by the Fédération des syndicats de l’enseignement (FSE CSQ) and the Quebec Provincial Association of Teachers (APEQ-QPAT), votes were tallied during yesterday’s Federal Council meeting. Accordingly, the FSE CSQ Federal Council and the QPAT acknowledge that 74% of their members have indicated their acceptance of the sectorial settlement, although many expressed their disappointment when voting. However, they agree that intersectorial negotiations must continue, alongside other Centrale des syndicats du Québec (CSQ) affiliated unions, to address other significant issues such as salary, parental rights, insurance, regional disparities and retirement.  “Though teachers recognize interesting developments involving certain aspects such as occupational integration and autonomy, this agreement demonstrates their resilience given the current context. It was important for teachers to voice their disappointment despite their acceptance of the proposed settlement. They were expecting more from a government that came across as having made education a top priority. Consequently, Minister Roberge will not encounter the enthusiasm or smiles he hoped for given that this settlement does nothing to significantly alleviate the teachers’ workload. And that heavy workload is precisely why teachers are getting sick and thinking about leaving. The government has decided to turn a deaf ear to this heartfelt appeal,” said FSE-CSQ President Josée Scalabrini, as she made a point of commending the teachers’ exemplary mobilization.
Now that sectorial table discussions have drawn to an end after a year and a half, and while salary parameter negotiations with the CSQ continue, FSE-CSQ and QPAT teachers understand now all too well:
“Teachers have told us they believe they have secured everything the current government is willing to give at the sectorial level. They have managed to further their situation and moved a few of their priorities forward. Adopting outdated political strategies, the government used old negotiation tactics while teachers provided innovative solutions and hoped for different approaches. Given that this is a three-year agreement, we will soon head back to the drawing board to carry on with our work. There is still a long road ahead because the status of the teaching profession is far from where it should be,” said QPAT President Heidi Yetman, who also praised the teachers’ mobilization.
Union organizations had decided to present this proposed sectorial settlement to teachers in a two-step process to provide some time to step back, think and discuss matters, and also to allow for a better global understanding of its pros and cons. Negotiations are not over, despite other agreements which served as a pretext for inaccurate and divisive government ads.
The FSE-CSQ and QPAT take this opportunity to reiterate the importance of properly recognizing the teachers and teaching personnel in Northern Québec, represented among others by the Association of Employees of Northern Quebec (AENQ-CSQ), whose negotiations have not produced the desired results. The staff’s working conditions and the students’ learning conditions, as well as the living conditions in Northern Québec, should be priorities for a government that says it wants to do more and do better with Inuit and indigenous communities.
“Nonetheless, we remain hopeful that negotiations for our support staff and professional colleagues, all full-fledged members of our school teams, will help improve their working conditions. Whether in terms of salary, work organization or additional resources, the improvements called for, even if currently disregarded by Québec, will clearly impact the attraction and retention of our colleagues as they consider working in the private sector or opting for less precarious work. Their working conditions will also have a direct impact on our tasks as well as on the quantity and quality of services provided to our students,” concluded the union representatives.
FSE & QPAT Press release – Teacher negotiations2021-05-182021-06-28https://aenq.org/wp-content/uploads/2021/05/logo2021-aenq.pngAENQhttps://aenq.org/wp-content/uploads/2021/06/press-release.png200px200px
________________________________ © 2022 AENQ 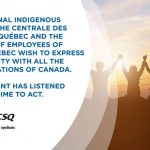