97% IN FAVOR OF KSB AGREEMENTS IN PRINCIPLE
As you know, we have reached agreements in principle with the KSB for the teachers on March 17 and for the support staff on March 18. General Assemblies took place on March 30th and more than 97% of the teachers and, also, more than 97% of the support staff members who voted did so in favor of these agreements in principle. We hope everything will be done in time so these new collective agreements (E4 and S9) come into effect before the beginning of next school year.
ENDLESS NEGOTIATIONS WITH CSB
As for the negotiations with the CSB, they are still difficult at both tables. We thought on going on strike but at the end of March, at a coordination meeting with the federations and the CSQ, we received the news that the Cree School Board reached an agreement with the Treasury Board on a new Protocol of Negotiations and new funding. The necessary mandates were to be given to the members of the Managerial Negotiation Committee for the CSB in order to conclude the negotiations by April 5, 2022. We had negotiation meetings at both tables on April 4. Deception. That’s the feeling we felt after each of these meetings. We received only one suppositively good news but without any modalities. We couldn’t determine if it really was good news. The employer’s representatives told us that they didn’t have the time to draft a final global offer, that we had to be a little more patient. The next negotiation meeting at the teachers’ table is scheduled to take place on April 19. No date has been set for the support staff since we informed the employers’ representatives that we were ready to meet earlier to conclude these never-ending negotiations. We are awaiting a response from them. We expect no less than what was reached at the Kativik tables for our CSB members.
Mobilization
It is clear that if members want substantial gains, particularly in terms of regional disparities at the Cree School Board, there must be significant and ongoing mobilization in all of our schools and centres. For now, we are asking our members to wear a black T-shirt every Tuesday and Thursday. Buttons have also been sent to delegates. We urge you to wear them! The purpose of this visibility action is to demonstrate to management that our members are eager to see their working conditions improved.
Next Round of Negotiations, Already…
The present round of negotiation isn’t over yet and we have already been planning the next round of negotiations, within the CSQ, for several months. Our demands will have to be tabled no later than November 1st, 2022.
You should be consulted in the coming months for what should be your demands at our AENQ negotiation tables. As for the intersectoral negotiations on salary and premiums, parental rights, and pension plan, you should be consulted at the beginning of the next school year.
AENQ Facebook Page
If you haven’t already, we invite you to follow us on Facebook. When you ask to join the group, make sure your name is recognizable so that we can validate that you are indeed a member of the AENQ (CSQ) before confirming your membership in the group.
Also, visit our new website www.aenq.org frequently.
Solidarity!
Larry Imbeault, President and Negotiation Coordinator
Nego Newsletter No. 19 – April 11, 2022 – Negotiations with the Kativik School Board (KSB) and the Cree School Board (CSB)2022-04-112022-05-03https://aenq.org/wp-content/uploads/2021/05/logo2021-aenq.pngAENQhttps://aenq.org/wp-content/uploads/2021/05/info-negof.png200px200px
________________________________ © 2022 AENQ 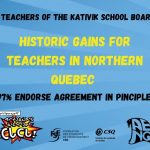 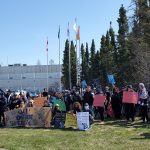